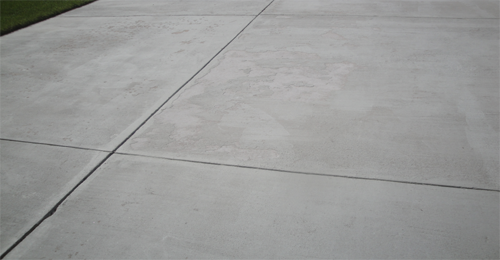 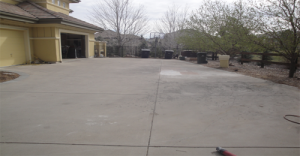 As shown in the photograph above, concrete spalling is the flaking off of the concrete surface. It looks like little tiny chips of the concrete coming off leaving a divot, usually about a 1/4” to a 1/2” in diameter and 1/4” to 3/8” in depth. At first, it appears to be isolated in areas of your driveway but quickly spreads to other areas like a rash gaining size and population.

Concrete spalling occurs from either extremely hot or extremely cold weather. Spalling can also occur during the concrete installation process if the concrete surface is overworked.

Either way, the finish has been weakened and within a couple of years after installation will begin forming small 1/4” to 1/2” circles patterns in the concrete finish usually dozens of them in a single area. Eventually, these circles in the concrete pop loose creating divots that we call spalling.

Spalling of concrete is far more common than you may think, affecting 1 out of  3 driveways. You may have noticed this in your own neighborhood with how many driveways have spalling in them. Or in higher-end neighborhoods that have a large driveway and the potential for overworking the surface is significantly higher due to the volume of concrete being installed.

It is best to catch this as soon as possible before it is too late to repair. Many homeowners see the spalling occurring and just ignore it. Then when it gets really bad, they call a concrete contractor that informs them that the concrete needs to be replaced. You don’t need need to let it go until its too late.

There are systems available to fix this problem. Very beautiful systems that will provide you with a beautiful decorative driveway for far fewer costs than replacement. The secret here is to not let it go so far that replacement is your only option.

Concrete Restoration Systems and its parent company have been providing and specializes in driveway restorations and decorative concrete solutions in the Denver area for over 40 years and have an A+ rating with the BBB. Call us at 303-435-3334 and have one of our consultants come out and provide free consultation on your concrete needs.